The morning started off raining, sometimes very hard.  By 9:00 am the rain stopped.  The Gunpowder flow was approximately 150 cfs, not too bad for wading and I would call it only slightly off color.  I noted many places with woody debris outside the river banks indicating very high water during the previous weeks.  Many new tree falls across the river and paths, but many previous old downed trees flushed away.  I did see a few tan caddis, size 14-16, maybe a total of 6.  Our Winner Sean noted he saw a few rises.  There were reports of a bird attacking their fly and a scary heron screaming at them.

The participants scattered and two fished the Masemore section, one upstream, one downstream, one near Falls Rd, one at Bunker Hill, and one bounced around like a pin-ball in a pin-ball machine and fished both Masemore and Bunker Hill.

Sean Beck showed up with two rods.  One strapped to his back looking like a radio antenna or lightning rod.  He also had a go-pro attached to his head ready for battle.  Of course he said it wasn’t working so we don’t have video evidence.  He started right off the parking lot on Masemore and caught 2 trout and let everyone know.  Sean returned with only 30 seconds to spare before being disqualified.  He showed his mop fly which started to fall apart around 11:00 from the many trout caught.  He had to continuously thread the mop material back onto the hook.

Bob Dietz returned and showed his wet fly and it was also falling apart with most of the soft hackle missing, maybe only 1-2 barbs remaining, and almost representing a Walt’s worm.  Bob demonstrated his wet fly fishing technique by walking in the stream to the Masemore bridge with the line and fly trailing behind and catching his last 5” trout.  It was within the time period so we had to count it.

Thank you all for participating.

This email address is being protected from spambots. You need JavaScript enabled to view it. 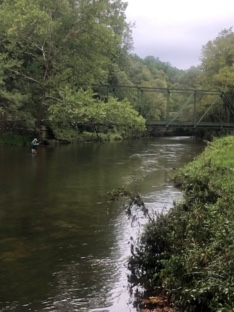